The winner of the 4th edition has been the “little French Pompeii” of Vienne (on the banks of Rhône, about 30 km south of Lyon) a Roman city of about 7.000 square meters, populated since the I century AD, with lavish villas with mosaics, monumental statues and public offices, that existed for three centuries and was destroyed by a series of sudden fires.

The Prize has been awarded to Benjamin Clément, the Associate Researcher at the ArAr Laboratoire Archéologie et Archéométrie of the University of Lyon who leads the work on Friday, November 16th at the presence of Omar, archaeologist and son of Khaled al-Asaad. For archaeologist Clément it is “undoubtedly the discovery of the most important Roman site of the last 40 or 50 years”. 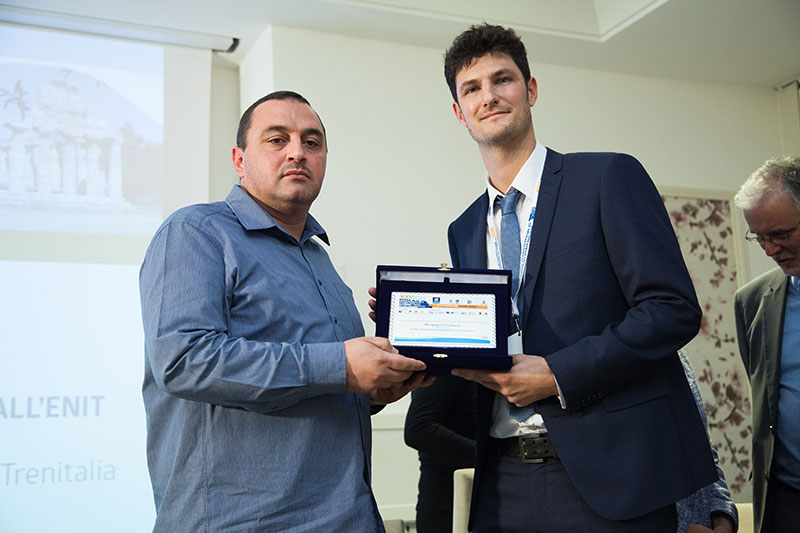 The “Special Award”, for the archaeological discovery with the greatest consensus from the general public through the Facebook page of the Exchange, has been assigned to the most ancient port of a Sumerian city, found at Abu Tbeirah by the Italian-Iraqi archaeological mission, directed by Franco D’Agostino and Licia Romano of “Sapienza” University of Rome.

The first five archaeological discoveries of 2017 candidates for the victory of the 4th edition were: 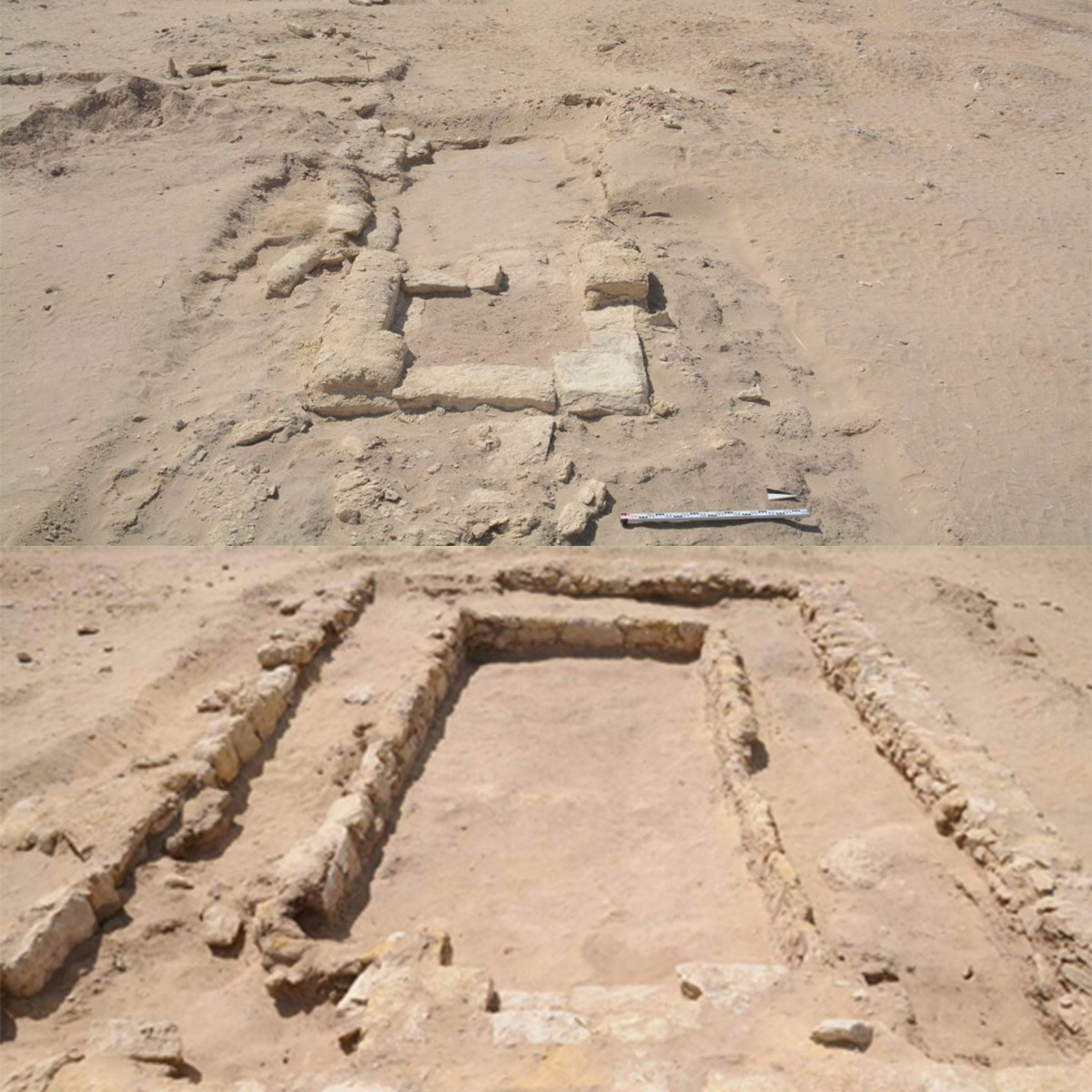 At Al Fayoum, Egypt’s largest oasis, nicknamed the garden of Egypt, 130 km southwest of Cairo, in the ancient village of Philoteris, today’s oasis of Madinat Watfa near Qarun Lake, German – Egyptians archaeologists of the Fayum Survey Project found the first known Hellenistic gymnasium in Egypt.
The presence of “gymnasia” in Egypt was already attested by written sources, especially in the Ptolemaic papyri, but no trace was ever found. The excavations brought to light architectural elements attributable to a running track, a gym, but also to gardens and other meeting places.Aymen Ashmawi, Head of the Department of Antiquities of Ancient Egypt at the Ministry of Antiquities, says that “the gymnasium included a large meeting room, then with many statues, a dining room and a courtyard. The running track was almost 200 mt long, for the typical 180 mt stadium races. Sumptuous gardens were present around the building”.
Cornelia Römer, Responsible of the excavations on behalf of the German Archaeological Institute (DAI) adds that “these gymnasiums were privately financed by wealthy people, eager for their villages to become even more Greek. In these places, young Greek men of the high society trained in sports, learned to read and write, and enjoyed philosophical discussions”.
This sensational discovery, the first of its kind, clearly shows the impact that Greek life had in Egypt; Alexander the Great was the first to introduce it to Egypt, and later thousands of Greek colonists arrived there attracted by the new Ptolemaic kingdom, which promised peace and prosperity.

France: a little Pompeii in Vienne 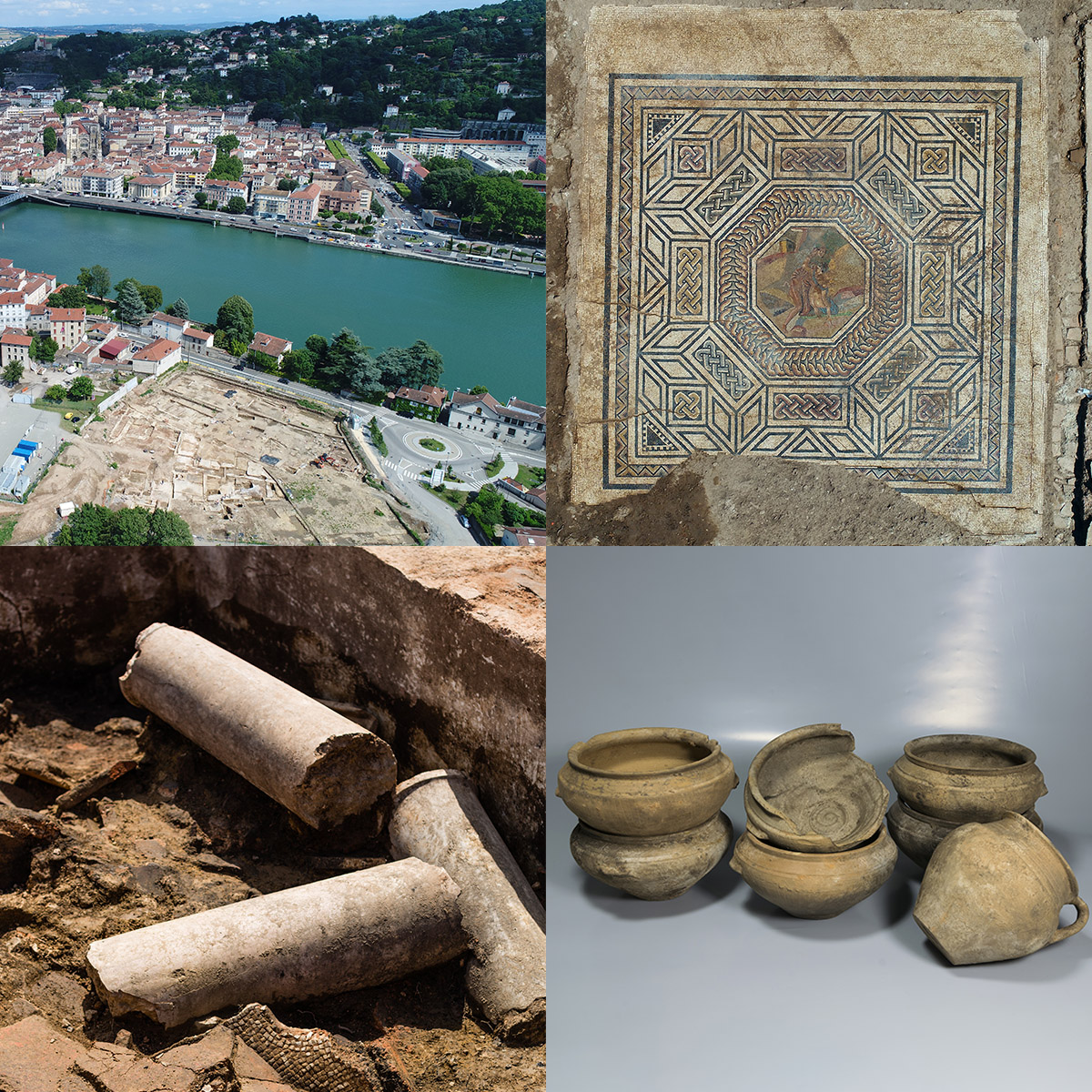 France: a little Pompeii in Vienne

The finding of a Roman city, of about 7.000 sq mt and populated since I century AD, with luxurious villas with mosaics and monumental statues and public offices, that existed for three centuries and was destroyed by a series of sudden fires, happened near Vienne, on the banks of Rhône, about 30 km south of Lyon, the capital of the Gauls. According to Benjamin Clement, the archaeologist Associated Researcher at Laboratoire ArAr, Archéologie et Archéométrie, who leads the works, “it is without doubts the most important excavation of a Roman site of the last 40 or 50 years”.
The city of Vienne, already famous for its Roman theatre and for a temple, was an important hub on the road that connected Northern Gaul with the province of Gallia Narbonensis, today’s Southern France.
The site was discovered on April 2017, after the start of construction works for a residential complex.
Many of the objects were found, not only in an excellent state of conservation, but in that state of rationality in the disorder, of an environment petrified from one moment to the next, just like a site suddenly abandoned for an emergency. In this, as well as in the typology of the environments found, lies the similarity with the city devastated by the Vesuvian eruption.
Among the findings there was an imposing house of the Bacchanalia, inside which there is a mosaic floor showing a procession of maenads and satyrs, in another area a beautiful mosaic depicts Talia, the patron muse of comedy, kidnapped by the god-satyr Pan, in addition to a large public building with a monumental fountain, an atypical structure for the times, most likely the Schola of rhetoric and / or philosophy, which scholars know was hosted in Vienne.

Iraq: the most ancient port of a Sumerian city at Abu Tbeirah 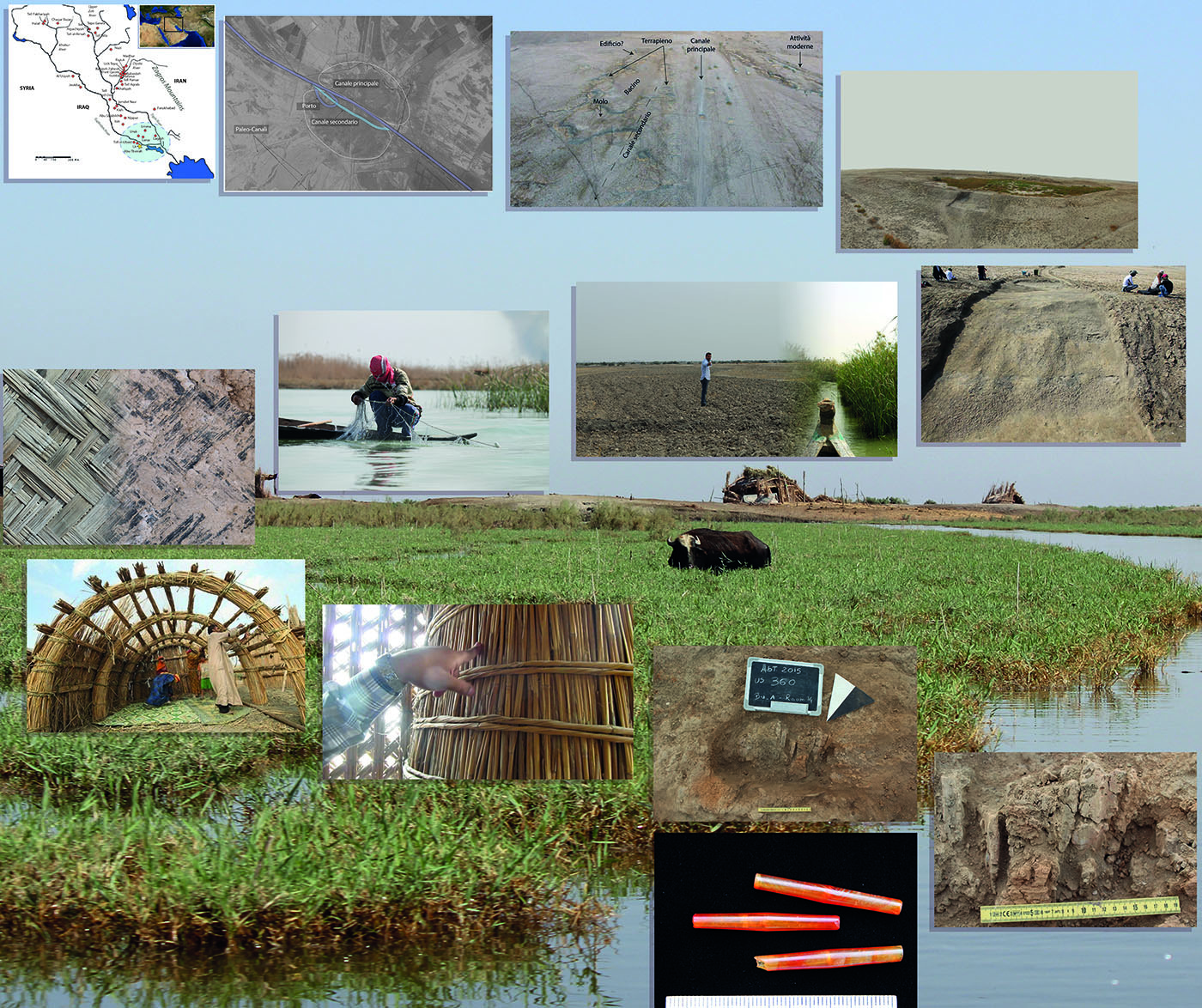 Iraq: the most ancient port of a Sumerian city at Abu Tbeirah

The discovery of a port of the III millenium BC in the North-West part of the Tell of Abu Tbeirah (of about 130×140 mt, next to the ancient coast line of the Arabic Gulf, a peculiar position inside a swampy environment next to the sea) by the Italian-Iraqi archaeological mission, directed by Franco D’Agostino and Licia Romano of “Sapienza” University of Rome, writes a new chapter of the history of Mesopotamia, overcoming the common image that identifies the ancient civilizations as surrounded by heaps of fields of cereals, watered by artificial channels.
All the Sumerian cities were organized around the Templar / Palatine pole and connected to each other through canals, for this reason they were equipped with a port for the management of contacts and trade.
The port is an artificial basin, a more depressed area, surrounded by a massive embankment with a core of clay bricks, with two entrances that connected it with the city and that are clearly visible also from Google satellite images. It is the oldest port excavated in Iraq so far, as the only examples of port structures comes from Ur, two thousand years later.
The connection of the site with the Sumerian marshes does not exclude that the port was not exclusively assigned to the function of mooring boats and managing trade with other cities, but it also was a water reserve and an immense compensation tank of the floods of the river, as well as the fulcrum of various activities of the settlement related to the use of water resources.
The discovery opens up new research scenarios on the life of the cities south of Mesopotamia, but also on the reasons for their abandonment. The strong connection with the swamps of the delta, therefore with an environment extremely sensitive to climate change and the rainfall regime, could clarify the reasons for the reduction and then disappearance of the settlement of Abu Tbeirah at the end of the third millennium BC, a time in which a significant climate change happened in various parts of the world, the so-called 4.2 ka BP (ed. 4200 years from the present) event.

Italy: the House of the Centurion from the excavations of Metro C in Rome 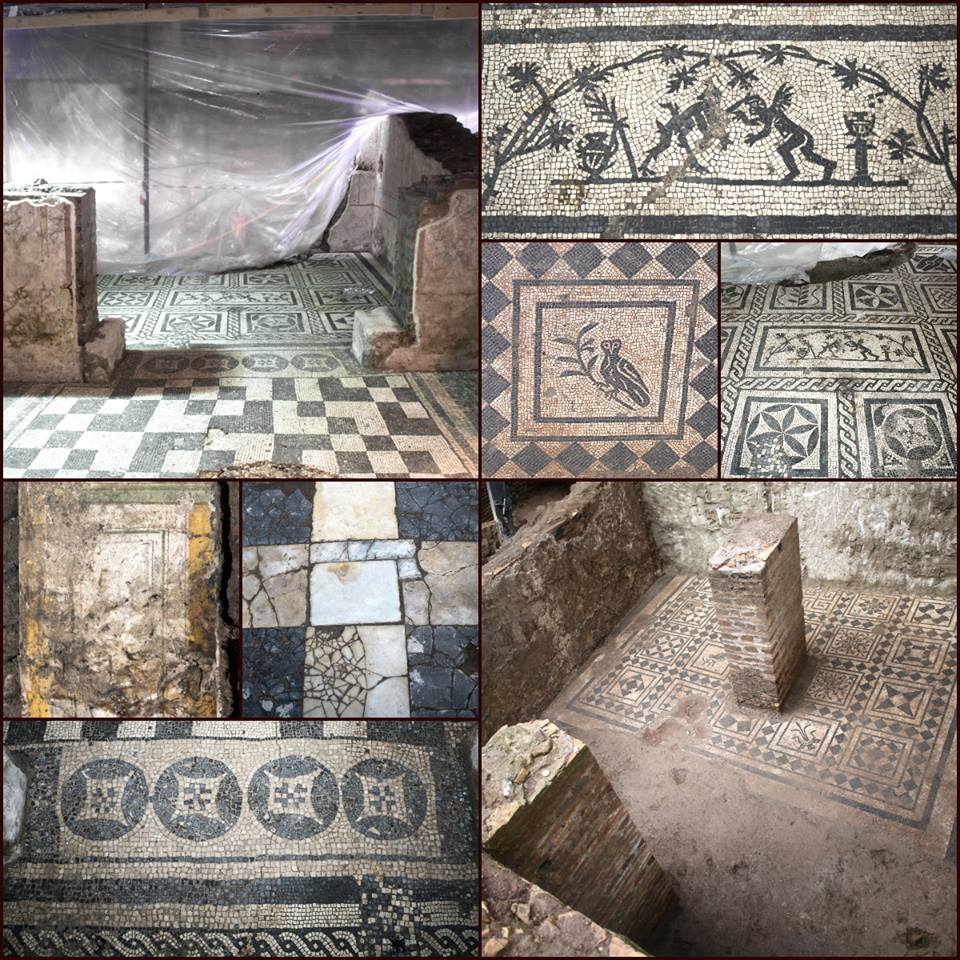 Italy: the House of the Centurion from the excavations of Metro C in Rome

Evocative black and white mosaics, slate and white marble floors, paintings on the walls, the remains of a fountain. All of this was found at a depth of twelve meters, during the excavations of the Metro C construction site. This is an extraordinary discovery in an area, near the Amba Aradam metro station, that since the spring of 2016 has returned structures related to the military world. The most recent discovery has been called the Commander’s House.
White and black-figure mosaics, geometries, trees, a satyr and a cupid have re-emerged from the excavations, fighting or dancing under a branch of grapes, a bird on a branch and even an ancient fountain, and two barracks buildings with the dormitories of imperial soldiers.
The structure may have housed special militias, that is, the emperor’s secret services.
For archaeologists, Simona Morretta and Rossella Rea, of the Special Superintendence of Archaeology, Fine Arts and Landscape of Rome, led by Francesco Prosperetti, the discovery would be an integral part of the military complex, dating back to the early II century AD, at the height of the Hadrianic age.The protagonist of the discovery is the Domus of the Commander of the barracks, a rectangular building of about 300 square meters, in which the access steps to the corridor, the floor of opus spicatum (the herringbone bricks typical of the time), the 14 rooms around a sort of central courtyard, the remains of a fountain with tanks, probably enriched by decorative sculptures, are recognizable. The square floors of white marble and slate, in opus sectile, are incredible, and the surrounding walls are decorated with coloured or white plasters. One of the rooms was probably heated, in light of the discovery of the suspensurae, piles of bricks that formed a gap for the passage of hot air. The excavation also brought to light the remains of a staircase that was realized later to go up to the upper floor, which probably housed offices or other soldiers’ dormitories. In addition, a service area was identified with brick floors, tubs, water channels and a travertine threshold, intended to accommodate the goods to be stored, and again, objects of common use such as gold rings, the inlaid ivory handle of a dagger, amulets and brick stamps that allowed the remains to be dated. The two new buildings, such as the soldiers’ dormitory, were abandoned and then shaved to a height of one and a half meters after the middle of the III century, when in 271 the fortifications of the Aurelian Walls began to be built.
The importance of the discovery is due to the complexity and state of conservation of the castra, as well as to their position, which integrates the entire belt of military buildings found between the Lateran and the Celio, a real military district.The remains have been dismantled and they will be reassembled inside the museum station, called “the most beautiful archaeological underground station in the world”.

Tunisia: an underwater Roman city in the gulf of Hammamet 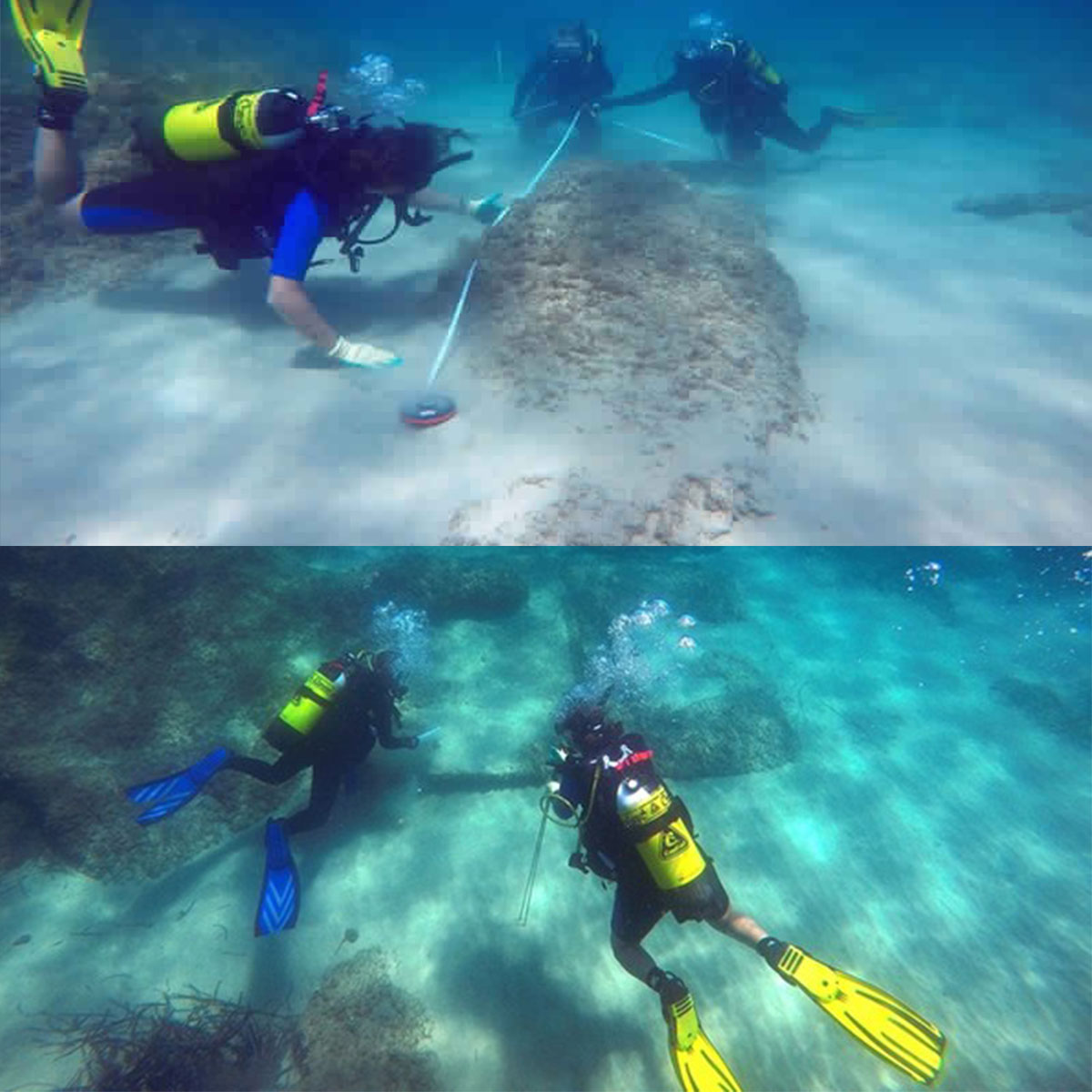 Tunisia: an underwater Roman city in the gulf of Hammamet

An underwater Roman city, Neapolis, with its web of cardi and decumani expanding for about 20 hectares under the sea of the Gulf of Hammamet in Tunisia has been discovered by archaeologists from Sardinia, Tunisia and Algeria during the 9th ones of a series of archaeological missions started in 2010 by Consorzio Uno per gli Studi Universitari of Oristano, archaeologists Raimondo Zucca and Pier Giorgio Spanu of the Department of History, Sciences of the Man and of the Education of the University of Sassari and professor Mounir Fantar of INP Institut National du Patrimoine of Tunis.
The area is a sort of industrial zone of the already known Colonia Iulia Neapolis and it is characterized by the presence of a great number of tanks, used for the salting of big quantities of fish (particularly European pilchards but also small tuna), that were put into terracotta amphoras, loaded on ships for various countries of the Mediterranean area.
The adventure started in 2009 based on a proposal of professor Zucca, who after having studied the Sardinian Neapolis, in front of the Gulf of Oristano, wanted to study also the twin and namesake African city.
Underwater and aerial surveys that were also carried out during the just concluded mission made it possible to complete the planimetry of the underwater city, that represents almost a third of the entire Colonia Iulia Neapolis.
Thanks to the discovery of a great fragment of calcareous slab used for an inscription, the mission also managed to discover, among the ruins of the city on the land, what could be the 27th Roman forum square (the 4th one on African territory) with its temple dedicated to Jupiter Capitolinus, its Curia and its judicial Basilica. A ruinous earthquake that occurred around the half of the IV century AD could have submerged that particular area of the city, aspects yet to reveal also thanks to the participation of archaeo-seismologists and underwater geomorphologists.