The discovery of the year was the large Bronze Age city in Northern Iraq, next to the small Kurdish village of Bassetki in the autonomous region of Kurdistan, established in around 3000 BC and whose history lasted for 1200 years: the Award have been assigned to Peter Pfälzner, Coordinator of the archaeological mission and Director of the Department of Archaeology of Near East of IANES Institute Ancient Near Eastern Studies University of Tübingen, on Friday, October 27th at the presence of Waleed, Fayrouz and Omar, archaeologists and Khaled al-Asaad. 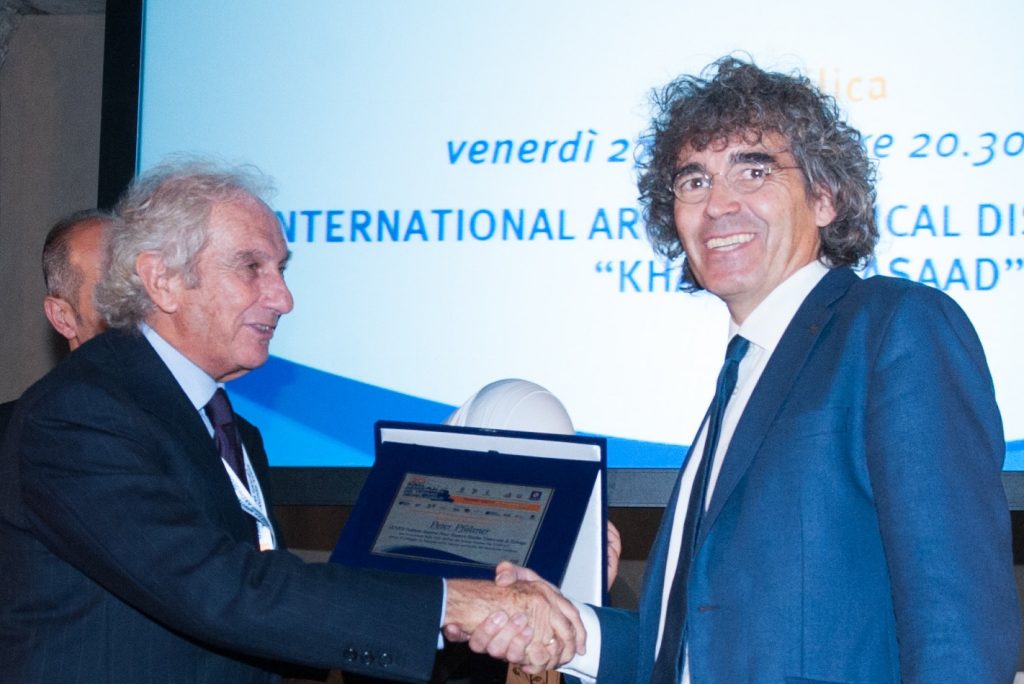 The first five archaeological discoveries were:

THE BOAT BUILDING OF SENUSRET III AND THE GRAFFITI OF 120 BOATS IN ABYDOS, EGYPT

The boat building of Senusret III and the graffiti of 120 boats in Abydos, Egypt

The spectacular discovery was made in South Abydos (city of the ancient Egypt, discovered nearby the current city of el-‛Arābah el-Madfūnah, on the Western desert nearby el-Bályanā, about 350 km south of Cairo) by Penn Museum’s (University of Pennsylvania) Mission, directed by Josef Wegner. Between 2014 and 2016, infact, an underground structure emerged from the sand in proximity of the funerary complex of Senusret III (1878 – 1841). It was already known in 1904 (Arthur Weigall, Egypt Exploration Fund), but it was never digged. The structure is a rectangular room (21 mt x 4 mt) made of mud bricks and with barrel vault. On its walls, covered in white plaster, a great number of graffiti (120) has been found, representing boats of various kind and size (from 10 cm to 1.5 mt), with some images of gazelles, bovines and flowers.
The depiction of the details is very precise, thanks to the presence of trees, sails, cabins, sheep’s wheels, oars and rowers.

Even if the destination of use of the structure is not clear yet, it is provable the so – called “Boat building” hosted the funerary boat of the pharaoh of the XII dinasty, whose tablets has been found in a cavity at the center of the room. Another interesting discovery are more than 145 “beer jars”, buried along the path leading to the room, many of them with the hem that faces the entrance. The presence of this ceramics is explained as the symbolic burial of water jar to float the royal boat in its journey to the afterlife, or as a storage of jars used for the lubrication of the terrain during the pulling of the boat into the structure.

THE FIRST ARCHITECTURAL WORK OF NEANDERTHALS IN A CAVE IN BRUNIQUEL, IN THE SOUTH OF FRANCE

The first architectural work of Neanderthals in a cave in Bruniquel, in the south of France

400 pieces of stalagmites, assembled in the shape of two huge rings, arguably with fires at the center, likely build by Neanderthal who were able to realize complex architectural projects. The study has been coordinated by Jacques Jaubert from the University of Bordeaux.
Discovered in the cave of Bruniquel in the south of France in 1992, these rings are being studied just now. Neanderthal lived in Europe between 400.000 and 40.000 years ago. Until Homo Sapiens, our direct progenitors, arrived from Africa, they were the only human beings who populate the continent. We know about their lives and their appearence thanks to fragments of skeletons found by paleontologists. In Italy, one of the most studied specimens is the Man of Altamura, a Neanderthal who fell in the cave of Lamalunga (Bari) and who remained stuck there until his finding.

The rings are made of about 400 pieces of stalagmites, which made them the most ancient known constructions build by mankind. Their society already had some elements of modernity, like the organization of space, the use of fire and the occupation of the caves. Their presence, 336 mt from the entrance of the cave, shows that these progenitors of the human race already dominated the underground environment.

The fact that the rings has been built with pieces this huge means that the construction was carefully planned, even if its function is not completely clear yet. The hypothesis range from shelter to symbolic value. The structures made with stalagmites have been known since 1992, but not their date of realization. Jaubert’s team managed to date the dust which welded the stalagmites together after the laying, a detail which made it possible for us to ascribe its building to Neanderthals.

The team of archaeologists of the Institute for Ancient Near Eastern Studies, from the University of Tübingen (IANES) discovered a large Bronze Age city in Northern Iraq, next to the small Kurdish village of Bassetki, not far from the city of Dohuk, in the autonomous region of Kurdistan. The city was established in c. 3000 BC and its history lasted for 1200 years. The archaeologists also discovered settlement layers dating back to the Akkadian Empire (2340 – 2200 BC), which is considered the first empire of human history. The team of researchers was coordinated by Professor Peter Pfalzner from the University of Tübingen and by Dr. Hasab Qasim from the Directorate of Antiquities in Dohuk. Since 2700 BC, the city had a defensive wall on its upper part, protecting its inhabitants from invaders. Fragments of cuneiform Assyrian tablets, dating back to c. 1300 BC were also found, suggesting the presence of a temple devoted to Adad, the Mesopotamic god of storms. Thanks to geomagnetic measurements, the archaeologists located a wide road network, several residential districts and a luxurious Bronze Age building. The inhabitants of the unknown city used to bury their dead outiside the city perimeter. The city was connected to other regions of Mesopotamia and Anatolia by a roadway dating back to c.1800 BC.

The discovery of the city of Bazeera, the current Barikot in the Pakistani valley of Swat, thanks to the work of Francesco Calmieri from ISMEO, has been asseverated by the recently completed examination of the material found by the site.
The valley, internationally known for its Taliban emirate and for the attack against Malala Yusufzai and her schoolmates, seems to be back to normal and it is a destination of archaeological tourism, with the new sites and the museum opened in 2013. The excavation of Barikot, the ancient Bazeera (12 hectares includine the acropolis) involves about one hectare of the South – Western districts of the ancient city. The excavation, led by the Mission and the Directorate of Archaeology and Museums of the Province of Khyber – Pakhtunkhwa is funded by the ACT project in the framework of the Italian – Pakistani deal of debt reconversion. Bazeera was besieged and conquered by the Macedonian troops led by Alexander the Great at the end of IV Century BC. Archaeology dated the city back to the Indo–Greek period, almost two centuries after Alexander, back to the time of Menander, the Greek King of Buddhist faith, whose coins has been found during the digging.

The city flourished and then it was abandoned at the end of the Kushana Empire, in the second half of the III Centuty AC, in conjunction with a violent earthquake.
The digging shows significant layers of the Indo-Greek city, which since now has been known thanks to the monumental city walls (half of the II Century BC), with its bastions and terreplains. A very ancient stratigrafy was artificially cut along the perimeter to build the Indo-Greek wall, exposing the remains of a prehistoric village. The analysis of the material revealed, with absolute certainty, that the pre-Indo-Greek urban leyers discovered inside the city dated back to the half of III Century BC, being a century older than the city wall, during the Mauring Empire. The study also confirmed that the proto-historic village dates to 1100-1000 BC.

400 TABLETS FROM THE ROMAN AGE IN THE CITY OF LONDON 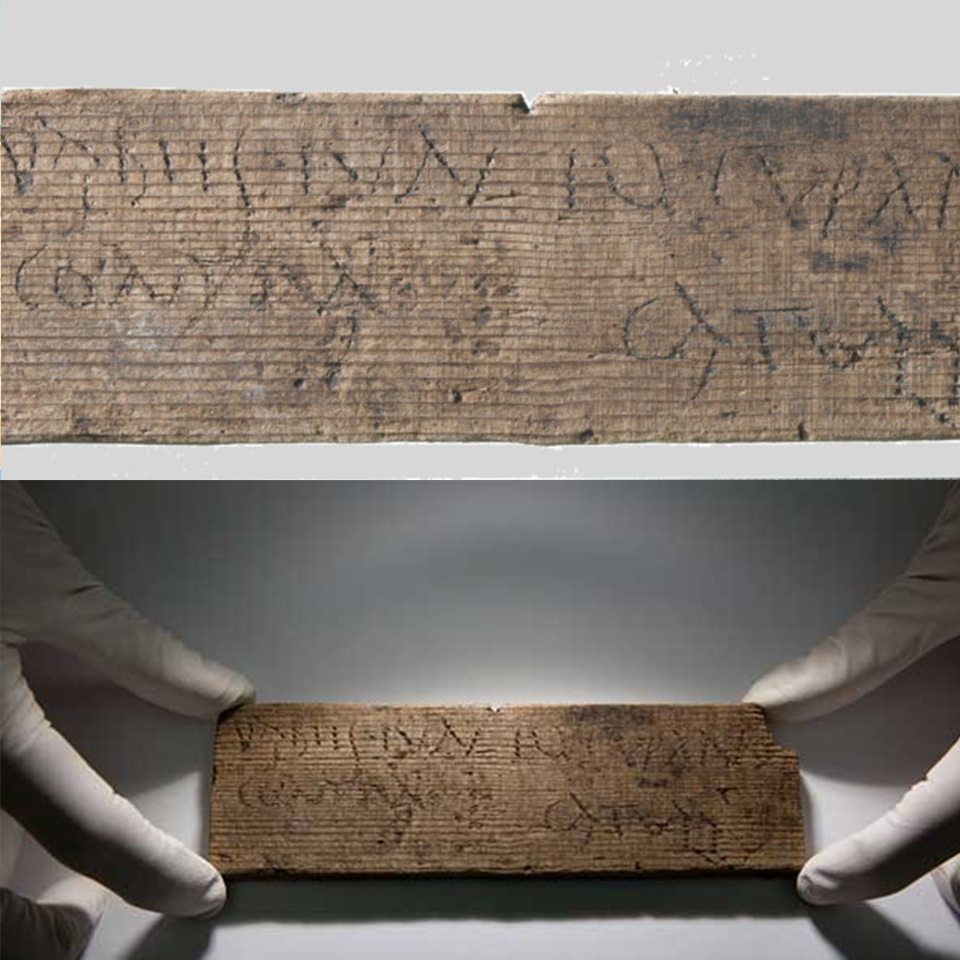 400 tablets from the Roman Age in London’s City

In the City of London, during the works of construction of a building for the communication multinational corporation Bloomberg, 405 tablets from the Roman age have been found.
The area of the finding was the location of the temple of Mitra. 87 tablets have been decoded, and they are of crucial importance since they provide a series of interesting information about the inhabitants of the city. This is particularly true for the period before and after the revolt of Boudica, the queen of the British Celtic Iceni tribe who in 61 AC led the most important uprising against the Romans, after which the city of Londinium was razed to the ground.

Some of the tablets record the swift recovery of the city after the destruction. For example, one of them shows a contract bearing the date of October 21, 62 AC, referring to a load to be delivered. Another one, from 65 AC, carries the most ancient written reference to the capital city, with the inscription “Londinium”. The tablets have been preserved thanks to the mud of Walbrook stream (now filled in). The lack of oxygen prevents the deterioration of the wood. Of course, only the engraving on the wood survived, while the layer of wax disappeared. The tablets have a great historical and archaeological value, as they record London in I Century DC and also the first generation of Londoners. With the most advanced technologies used by the Archaeological Department of the Museum of London, name, jobs and dates of the inhabitants of ancient London has been discovered, showing a city expanding and in full ferment.