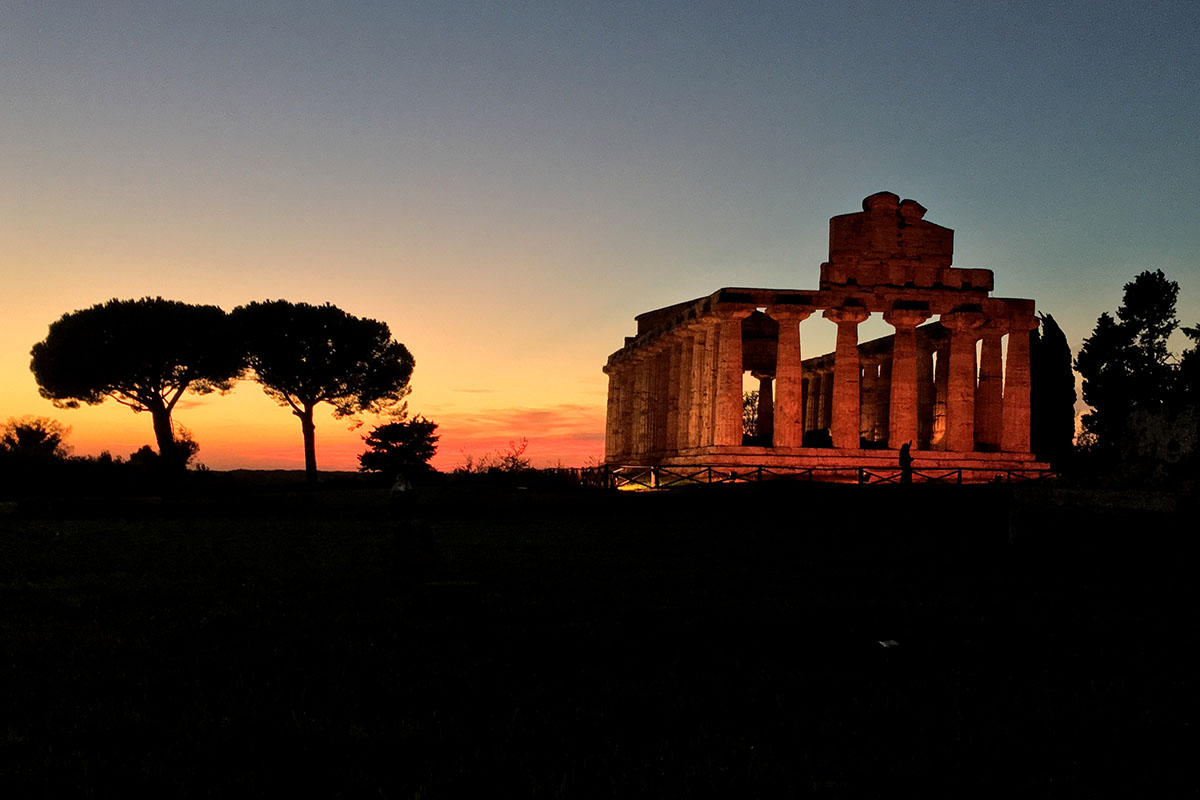 Since 2017 the Mediterranean Exchange of Archaeological Tourism is also in the Arabic language.

It is the very innovative campaign, without similar examples in Europe or in the world in the context of Tourism Fairs, which with the slogan “With the Exchange the archaeological tourism speaks Arabic” invites Arabic-speaking people interested in archeology and cultural tourism to connect to the website www.bmta.it or visit Paestum, a colony of Magna Graecia which has treasured the Greek and Roman culture, preserving the remains of both.
“It is not a commercial project, but a cultural one – as the founder and director Ugo Picarelli affirms – that of a new form of social inclusion, in the name of the “Mediterranean” denomination of the Exchange (geographical area crossroads of civilization) and the international recognition of the event by Unwto and Unesco (the United Nations of Tourism and Culture) as a best practice of intercultural dialogue. In Salerno, as in Southern Italy, live thousands of Arab citizens, many of whom probably know nothing about cultural heritage, although they live in places where their history is affirmed and where a certainly not secondary part of their cultural tradition fully emerges. Discovering it is not only an acquisition of knowledge, but an opportunity for dialogue and comparison, aware in their language that the cultural heritage, not only that of Unesco sites, also belongs to them “.
Not only web communication will be developed in Arabic, but also press office activities and the promotion of the Exchange with newsletters and intense activity through social networks.

Because the Exchange is recognized as a best practice for the commitment in favor of intercultural dialogue, not only through the participation in the Exhibition Hall of about 25 foreign countries and the annual presence of an Official Guest Country (in the years Egypt, Morocco, Tunisia, Syria , France, Algeria, Greece, Libya, Peru, Portugal, Cambodia, Turkey, Armenia, Venezuela, Azerbaijan, India), but also as since 2015 it annually dedicate three significant moments to this theme as part of the program:

– the meeting “#pernondimenticare il Museo del Bardo, 18 March 2015” with the participation of Director Moncef Ben Moussa, following the very fatal event at the Tunis Museum, to remember that cultural heritage is a fundamental tool for dialogue between cultures: every citizen of the world, regardless of religious or political affiliations, must be aware that cultural heritage is a common good and a representation of national identity, so it must be defended by all countries that make democracy their bulwark ;

– the focus on Palmyra with the launch of the hashtag “# unite4heritage for Palmyra” and a series of meetings on the destruction of cultural heritage, on wounded archeology and on the disintegration of identities. “United for Palmyra” means a commitment to protect the cultural and spiritual identity of one world: that of the many peoples of the Mediterranean area who meet Rome and Hellas to enliven the desert. Where civilization finds its bride;

– the International Archaeological Discovery Award “Khaled al-Asaad”, the unique discovery award in the world, named after the archaeologist symbol of Palmyra murdered by Isis, in the presence of some of his children: Fayrouz archaeologist, Walid last Director of Antiquities of Palmyra, Omar archaeologist with Paolo Matthiae archaeologist and Director of the Archaeological Mission in Ebla in Syria of the “Sapienza” University of Rome and Mohamad Saleh Last Director for Tourism of Palmyra. Palmyra, “The Bride of the Desert”, is the city of the Old Kingdom sacked and destroyed by ISIS terrorists, where the heroic keeper, the last witness of that moving page of beauty, was found dead, hanged, returned to the eyes of the world for the first time in 1929 by Henri Arnold Seyrig (French archaeologist, Directeur général des Antiquités de Syrie et du Liban in Beirut – Syria and Lebanon were a French mandate from 1922 – he was director of the Museums of France and the École du Louvre from 1960 to 1962).