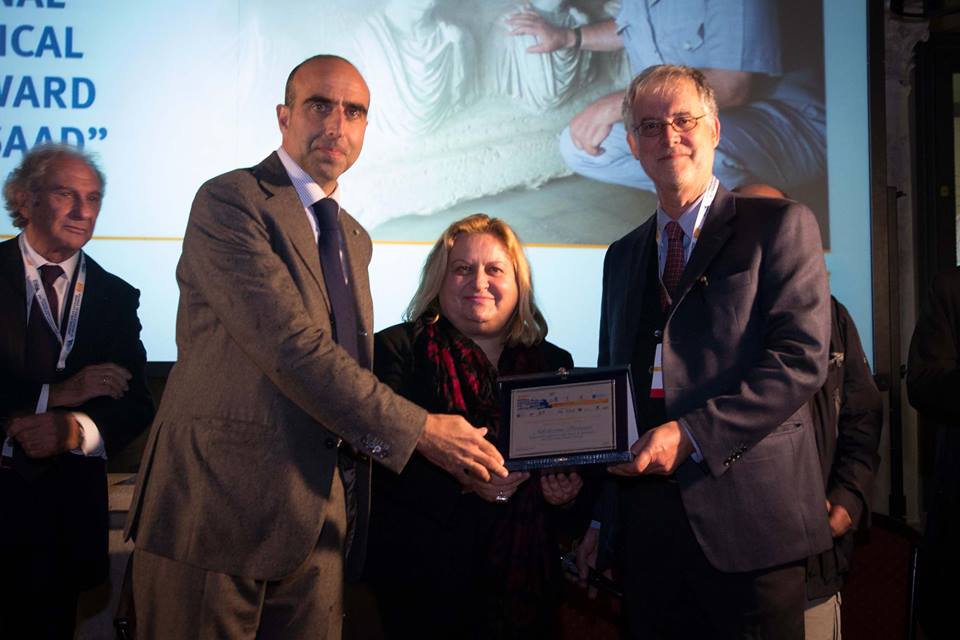 The Award of the first edition was delivered to the Greek archaeologist Katerina Peristeri, Responsible for excavations at Amphipolis

The first edition of the International Archaeological Discovery Award “Khaled al-Asaad” was awarded to the Tomb of Amphipolis – Verghina, Macedonia (Greece) as the most significant discovery of 2014: the Award was delivered to the Greek archaeologist Katerina Peristeri, Responsible for excavations at Amphipolis, Paestum on Friday, October 30th, at the conference that celebrated the 30th anniversary of Archeo.

The Tomb of Amphipolis was also awarded the “Special Award”, the Award to the discovery with the greatest consensus on the Facebook page of the Exchange.

The first five archaeological discoveries were:

The team of Greek archaeologists led by Katerina Peristeri found the largest ancient tomb ever discovered in Greece. The mound has a circumference of 496 meters. The entire base, a perfect circle, is supported by a 3-meter-high wall, made of large regular and well-connected blocks of Thasos marble. It is not known who it belongs to, for whom and why it was built at the end of the 4th century BC, a few years after the death of Alexander the Great in Babylon, in 323 BC. 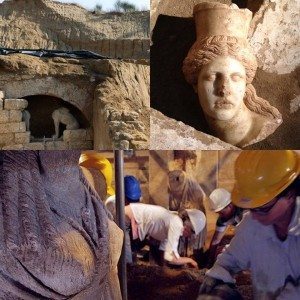 Works on the tomb have been in progress since 2009, but on August 10th,  2014 a spectacular entrance was identified and freed from earth and debris, a marble door guarded by two winged sphinxes sitting on an architrave that retains traces of its original colors, red, blue, black. Then, by clearing the room behind the sphinxes, covered by a marble barrel vault, a second room and another entrance were discovered. On the sides of the rectangular door, it features a pair of large caryatids in Thasos marble, the same used throughout the tomb, which support the architrave. The two magnificent statues displayed a rich, splendid drapery. The face of the first is intact, the other one was missing, but it was recovered under layers of dry mud. Now we are working to enter the third room, protected by a 13-meter-long marble wall that blocks the passage. The first intuition of the existence of a burial is due to the archaeologist Dimitri Lazaridis, who excavated in 1956 but found nothing. The archeologist of the Ministry of Culture Katerina Peristeri resumed the excavation in 2009, in 2012 a large part of the basement had been unearthed and cleaned up. Excluded the possibility that the tomb was destined to Alexander, it is believed it was for one of his generals, or perhaps for his mother, or for the wife of Alexander, Roxane and their young son Alexander IV, killed in 311 by one of the generals who were fighting for the succession to the throne. We only know who the architect was: a friend of Alexander, Deinokrates of Rhodes, who signed the work. The discovery of the burial chamber could reveal not only the name of the illustrious deceased but also extraordinary treasures. In 1977, in Verghina, not too far from Amphipolis, under a more modest mound, the tomb of Philip, Alexander’s father, was discovered intact and full of fantastic gold objects.

The Happisburgh site, on the English east coast of Norfolk, continues to rewrite our knowledge of the earliest human traces in Britain and Europe, which date back to a period between 850,000 and 950,000 years ago. For archaeologists and historians, the approximately 50 footprints left by a family (two adult males, two women and three or four boys, so it is assumed), walking on the beach hundreds of thousands of years ago, in search of molluscs, algae and crabs, is a discovery that rewrites the history of the origins of man. They are probably attributable to the species Homo antecessor, found in Spain in Atapuerca, a species of hominid dating back between 1.2 million and 800 thousand years ago, considered one of the first European hominids, belonging to an intermediate phase between Homo georgicus and the ‘Homo heidelbergensis (all dating back to the Pleistocene) and harbinger of archaic traits presumably mixed with many modern traits. The Happisburgh site had already become famous in 2010 for giving away the remains of stone tools and mammoth fossils, which testified the human presence around 800,000 years ago. Happisburgh’s footprints become, in chronological order, the third oldest footprints ever discovered and by far the oldest for the Old Continent. In fact, there are only two sites in the world, respectively in Tanzania and Kenya, which have more ancient footprints, reaching 3.5 million years ago.

3. LIGHT ON THE FIFTH DYNASTY OF THE PHARAOHS WITH THE TOMB OF KHENTAKAWESS III, Abu Sir – Egypt 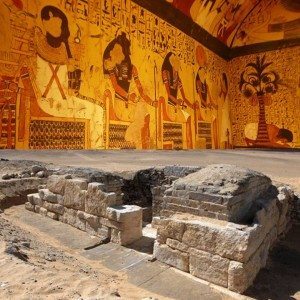 Light on the fifth dynasty of the Pharaohs with the tomb of Khentakawess III, Abu Sir – Egypt

A team of archaeologists coordinated by Miroslav Barta of the Institute of Egyptology of the Czech Republic has discovered in a vast necropolis built near the capital Cairo, in Abu Sir, the tomb of a previously unknown Egyptian queen. On the site there are several pyramids dedicated to the Pharaohs of the Fifth Dynasty of the Old Kingdom (2494-2345 BC), including Neferefre, which could be his wife. The name of the queen was identified as Khentakawess III thanks to the inscriptions on the walls of the tomb. This discovery will shed light on some unknown aspects of the Fifth Dynasty, which together with the Fourth Dynasty, saw the construction of the first pyramids. In addition to being identified as “the king’s wife”, the inscription also indicated that the queen was “the king’s mother”, probably referring to Pharaoh Menkauhor, the seventh ruler of the 5th dynasty, who administered the region around 2422 BC. – 2414 BC The upper part of the tomb consists of a “mastaba”, a rectangular structure with a flat roof with brick or stone sides, and a chapel, which originally had a pair of false doors on the west wall. The underground part of the tomb consists of a burial chamber. Researchers found about thirty copper and limestone tools in the excavation. Thanks to the discovery it will finally be possible to shed light on some still little known aspects of the 5th dynasty. 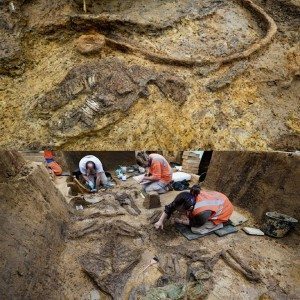 Tomb with chariot of a Prince of the Gauls, Warcq – France

A team of archaeologists of the Ardennes and of IRAP has discovered an aristocratic Gaulish tomb, in Warc, during the construction works of a road. A ceremonial or war chariot, appeared in Gaul in the seventh century B.C. and remained in use throughout the Celtic period, that is until the first century BC, a period to which is credited the discovery, was found inside the tomb. The chariot and a rich funeral furnishing seem to indicate that this was the tomb of a prince of the Gauls of 2,200 years ago. Champagne-Ardenne is famous for these burial practices, but Warcq’s tomb is truly exceptional. The burial chamber has been preserved for over a meter of depth and in this humid environment the formwork and its wooden ceiling, collapsed to the floor, have kept the burial in excellent condition. Remarkable is the opulent two-wheeled chariot, finely decorated with bronze coins and glass paste, while other objects in wood are covered with a thin gold leaf. One element that expresses all the social prestige of the character is also the burial of four horses: two at the south-west and north-west corners and two in front of the chariot, under the yoke. The deceased was placed instead on the body of the vehicle. A gold necklace, probably on a texture of leather or wood, was still around the neck; a fibula held the clothes, while a folded sword (defunctionalized according to a common practice in the Celtic tombs of Northern Italy but little attested in Gaul) and a razor were placed on the side. Three ceramic vases were crushed by the collapse of the ceiling: the remains of a pig are proof of an offer of food. Many clues allow us to attribute Warcq’s chariot tomb to the end of the 2nd or the beginning of the 1st century BC, when this way of burying the dead disappeared. 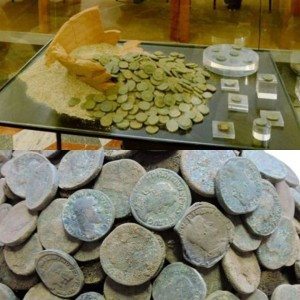 In Ticino, during some excavation works on a canalization in a private land in Orselina, near Locarno, the Archeology Service of the Cantonal Cultural Heritage Office recovered an exceptionally important set of coins from the Roman period: it is more than a thousand of bronze coins of the imperial period (the first data indicate II-III century AD) in good condition. The ceramic vessel that contained them was half a meter deep, in an area with few ancient remains, even if a few kilometers away there are the remains of a Roman settlement, which was an important connection center between Lake Maggiore and the north of the Alps. The coins, despite not having a great value for the art market, are relics of fundamental importance from the historical and cultural standpoint for the ancient world.