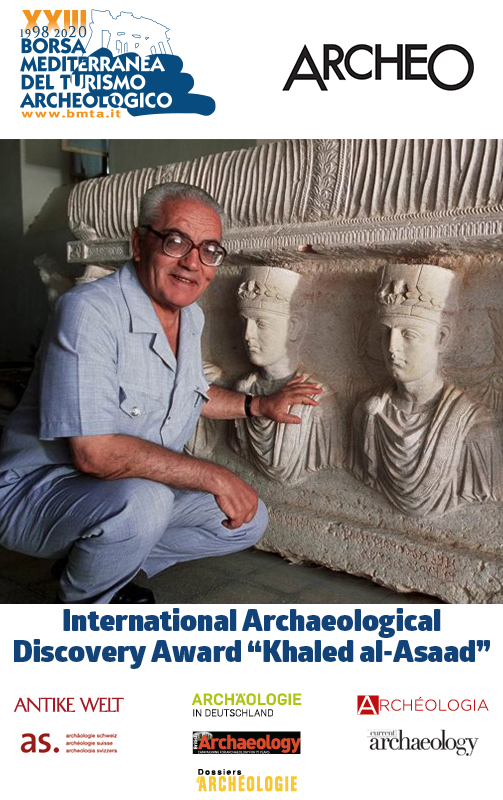 The Award is devoted to Khaled al-Asaad, the archaeologist of the site of Palmyra who paid with his life the defence of cultural heritage.

The remembrance of the archaeologist Paolo Matthiae: “For forty years, Khaled al-Asaad has been the Director of the archaeological excavations of Palmyra. He was the archaeologist of the city, he worked with missions from every country: from France to Germany, from Switzerland to Netherlands, from United States to Poland, and in the last years from Italy too, with the mission from Università Statale of Milan. He was a complete scholar, but mostly he had the peculiar feature of a member of the families of the cities of the desert. These people, like the ancient Bedouins, are lovely, kind and very hospitable, in a completely natural way, not excessive but very measured and discreet fashion. Khaled al-Asaad was a very lovely man, measured and with a kind soul. Even archaeologists who didn’t specialize in that period – Roman antiquity – often came to Palmyra to visit him and Khaled’s friendliness was total. He was a man deeply rooted in the city, and yet, for the international character of the site he oversaw, he was a citizen of the world, too. In various occasions his name was suggested for the position of General Director of Antiquities in Damascus, but I believed he preferred to remain in Palmyra, a city he identified himself with. Khaled was so certain he was just doing his job that he didn’t think he needed to escape. And as I remember him, he wasn’t a man who feared for his own life. Even if in retirement and almost 82, he preferred to stay in his city, precisely because he had understood its antiquities were in ranger. And probably, he imagined his undisputed moral authority could protect what Palmyra held and still holds today: the ruins of an absolutely extraordinary archaeological site, for all the Mediterranean area and for the whole world”.

The International Archaeological Discovery Award “Khaled al-Asaad” is the only global prize awarded to archaeologists, who with sacrifice, dedication, competence and scientific research live their job, both as scholars of the past and as professionals working for their territory.

The Director of the Exchange Ugo Picarelli and the Editor in Chief of Archeo Andreas Steiner shared this common path, aware that “today, civilizations and cultures of the past and their relations with the surrounding environment are more and more important to rediscover the identities, in a global society which is dispersing its values”. The Award, therefore, aims to spread the exchange of experiences, represented by international discoveries, also as best practices of intercultural dialogue.

Therefore, the sixth edition of the International Archaeological Discovery Award “Khaled al-Asaad”, according to the indications provided by the above – mentioned magazines, goes to the discovery of “ten Assyrian rock reliefs in the Kurdistan Region of Iraq”.

The Award will be assigned to Daniele Morandi Bonacossi, Director of the Italian Archaeological Mission to the Kurdistan Region of Iraq and Professor of Near Eastern Archaeology and Art History of the University of Udine, during the 23rd Mediterranean Exchange of Archaeological Tourism.

The rock reliefs of the Kurdistan Region of Iraq also win the “Special Award”, assigned to the archaeological discovery with the greatest consensus from the general public through the Facebook page of the Exchange.

The five archaeological discoveries of 2019 candidates for the victory of the sixth edition: